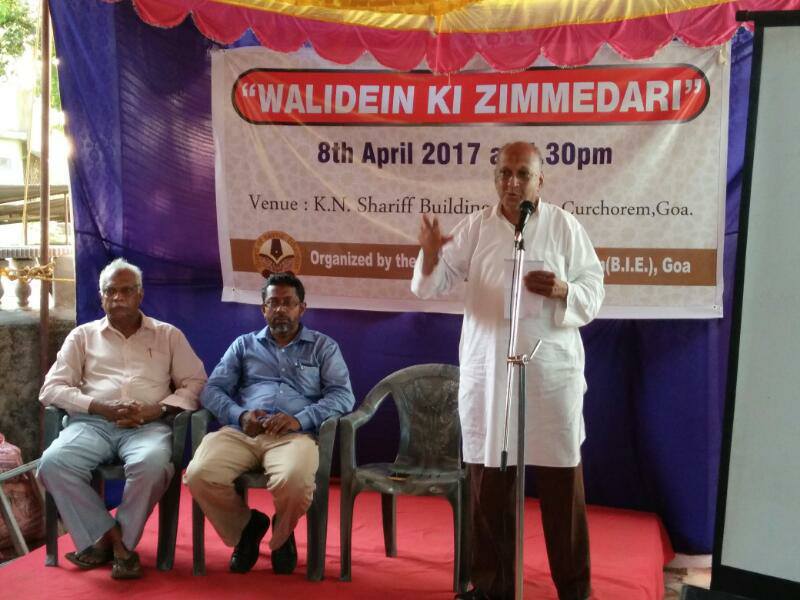 Board of Islamic Education Goa organised a programme at K.N Shariff Building at Bansai, Curchorem on the theme “Walidein Ki zimmedari”.
The first such programme at Sanvordem got a very positive response from the parents.
Many parents from adjoining towns Quepem and Sanguem also attended for the programme.
The inaugural words by the Secretary of the board emphasised on mentoring the children positively by avoiding the negative influences prevalent in the society. He said BIE intends to assist the parents in guiding their children to be responsible and excel academically. He introduced the “Islamiyat” weekend classes that aims to build ethical values along with understanding of Quran and teachings of the Prophet.
Later Asif Hussain through a power point presentation helped the gathering to understand the common mistakes parents do in the upbringing of their children.
He said that it is the responsibility of the parents to focus on the development and personality of their children .He expressed regret that men have taken the back seat in the nurturing their children and stated that both the father and mother need to team up and converge their opinion about the qualities they want to instill in the children. He asked the parents to take guidance from the Quran and Prophets life in this challenge. He said by the age of eight all the foundational values of life need to be taught to the children.
Earlier Kaukab Arshi student of BIE Margao began the programme with the recitation of the Quran and Ayesha Numa sang a “tarana” on the love for the mother.
The programme concluded with the chairman of the Board Jb Abdul Wahid Khan addressing the gathering. He appreciated the parents for their concern towards understanding their responsibilities regarding their children and the desire to equip themselves with knowledge to face the challenge of parenting.
He said love, compassion and a rational approach alone can help them guide their children. He said the present educational system lays stress on and it’s only object is to make the student capable to perform some tasks to earn livelihood but it fails to instill human and ethical values. He requested the parents to enroll their children to the “Islamiyat” weekend classes and create a friendly atmosphere of learning at home.
Jb K.N Shariff sahab thanked the organisers for the program and demanded more such programmes in the near future. Parents were seen rushing to the special children’s book exhibition arranged by House of Wisdom – Goa.
Junaid Haroon proposed the vote of thanks and Jb Asadullah Khan made suplications for the welfare of the people of Curchorem- Sanvordem.